For over a century, the Polish-American 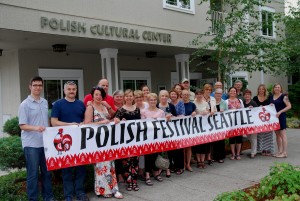 community of the Pacific Northwest has been contributing to the local fabric of society while supporting the homeland throughout its turbulent history. Over 125,000 residents of Washington State claim Polish ancestry; around 15,000 Poles live in the Seattle area. It may not sound like a lot, but their level of energy and initiative compensate for the numbers.

The first Polish immigrants arrived in Seattle in 1870 and by 1890 Polish organizations sprouted in several places in Washington State, from Pe Ell and Aberdeen through Tacoma and Seattle, to mining communities in the Mt. Rainier foothills and Cle Elum. The oldest local organization, the Polish National Alliance Lodge 156 in Tacoma, was established in 1890 and is still going strong. Other notable organizations from that period were the PNA Lodge in Wilkeson and in Seattle, founded in 1899, and the first Polish parish established in Tacoma in 1890. In Seattle, the Polish parish began to form in the 1980s and was eventually established in 1992.

The first Polish Hall opened in today’s Ballard neighborhood in 1906 and quickly proved to be too small for the growing community. In 1918, the Polish Home Association (PHA) was created to procure a larger hall, which after a fundraising campaign and a remodel, opened in the Capitol Hill neighborhood in 1920. The hall, named “Dom Polski” (Polish Home), has been a cornerstone of Polish life in Seattle ever since. After a recent expansion to modernize the facility, the Polish Cultural Center (PCC), serves, as it has been for almost a century, as a place for meetings, celebrations, dances and festivals for Poles and their multicultural friends.

The Center provides a home to a choir, a library, Polish Scouts, as well as a book, poetry, and dance clubs. The stage and ballroom welcome local performance groups and visiting guest artists and officials. Polish School has been offering Polish language classes to children and adults since 1951. To accommodate the growing number of families living on the east side of Lake Washington, another Polish school opened in Bellevue.

Seattle Polish Foundation (SPF) is a non-profit organization that promotes Polish heritage in the Pacific Northwest by sponsoring local events involving Polish culture and arts and by supporting Polish-American organizations in the area. During the last decade, it raised funds for improvements to the 100-year-old building of the Polish Cultural Center, and has provided financial and organizational assistance to cultural and art events. The annual Pierogi Fest became one of the most awaited events in the spring. Since 2012, SPF has been producing and sponsoring Polish Festival Seattle at the Seattle Center.

For half a century, Koło Pań/Polish Women’s Club has been organizing the popular Fall and Spring bazaars that bring multi-ethnic visitors to the Polish Cultural Center. In addition to financing many of the improvements at the center, the group supports initiatives and community events with contributions to the Salvation Army and Emergency Shelters for Women, orphanages in Poland, and many local Polish organizations.

With the Polish Women’s Club  initial funding of the “Project Sybiracy”, the film “A Trip to Nowhere” became a reality. The project shed light on the tragic history of those who survived the Gulag, including some members of the Koło Pań/Polish Women’s Club and the Polish community in the Seattle area.

For over 25, Seattle-Gdynia Sister City Association (SGSCA) has been committed to sharing and promoting business, cultural, and academic exchanges between the two cities. The organization has been awarded many honors for its achievements, including the Best Overall Program, 2006 and 2011, as well as Best Single Project, 2010 for its work with Gdynia Business Week. SGSCA is the organizer and sponsor of the Seattle Polish Film Festival, which became an important cultural event in Seattle.

Polish Language in the Pacific Northwest

Polish language has been taught at the University of Washington for over 60 years. To ensure that this tradition continues, a group of volunteers established the UW Polish Studies Endowment Committee (UWPSEC). The organization is raising funds to establish the Chair of Polish Studies, sponsors a Distinguished Speakers Series, provides student scholarships and brings Fulbright Lecturers of Polish Studies to the UW.

The Polish-American Chamber of Commerce Pacific Northwest (PACCPNW) promotes Polish-American trade cooperation, entrepreneurship and innovation. With the mission to facilitate exchange between Polish and American businesses, it promotes economic development, hosts trade delegations, and holds seminars related to business opportunities between Poland and the Pacific Northwest.

To keep the community and public informed about current events in the local Polish community Polish News Seattle reaches its recipients via internet every week. The Polish Home Association publishes a quarterly magazine, Nasz Dom, and internet podcast Radio Wisła keeps their listeners informed about local events and events in other areas.

The local Polish-American community is well represented among the ranks of Boeing, Amazon, Microsoft, and other companies. Polish scientists and professors teach at local universities and work in the medical industry. Many small businesses owned by Poles contribute to the economy across the region. For some, Seattle has been home for decades and for others for only a few years. No matter how long we have lived here, we love Seattle and the Pacific Northwest and we are pleased to bring and share with our city the traditions and culture of Poland.

For a list of all local Polish organizations, please check the links page on the Polish News Seattle website.

Polish Festival Seattle will be presenting an event on July 9th, 2022 at

Directions and Map of Seattle Center