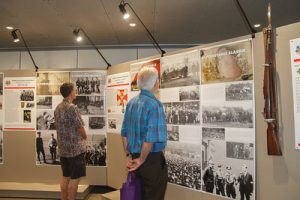 POLISH WINGS IN WWII
Special thanks to Krzysztof Poraj- Kuczewski

This exhibit will show engagement in WWII of our local from Polish Community pilots Alex Herbst as well as Roma and Roman Wall. 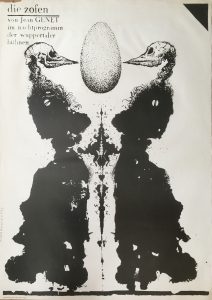 Tom Podl (1938-2011) was an active member and a creative force in our local Polish community. He was a co-founder of the Seattle Polish Film Festival in 1992 and of the Univ. of Washington Polish Studies Endowment Committee in 2005. He was also an avid art collector, and in 2000 his painting collection was shown at the National Museum of Cracow and the Zachęta Gallery in Warsaw.

The exhibition features renown masters of Polish poster art, such as Lenica, Pągowski, Sadowski, Starowieyski, Stasys and Wałkuski and others; these posters are being shown for the first time in Seattle. 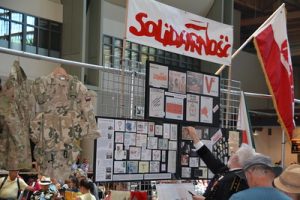 SOLIDARITY
Special thanks to Andrzej Mróz

The Solidarnosc exhibit showcases Andrzej Mroz’s private collection during his time in political prison, fighting for Poland’s freedom from Communism. 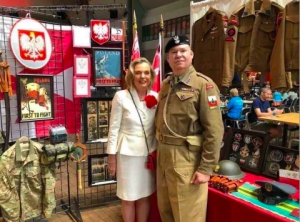 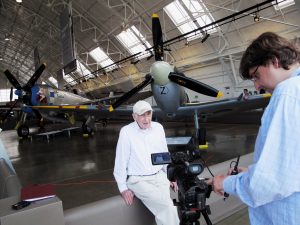 Cpt. Witold “Alex” Herbst (1919-2017) was a WWII hero who flew missions over Great Brittain and Europe with the Polish RAF Squadrons #303 and #308 as an ace fighter pilot. The documentary, featuring interviews with Cpt. Herbst and shot at different locations in and around Seattle, has been directed by Sławomir Ciok and produced by Krzysztof Poraj-Kuczewski. It premiered at the Seattle Museum of Flight in 2015. Cpt. Herbst also published a very frank and moving war memoir in Polish under the title “Cavalry of the Sky”(Podniebna kawaleria). 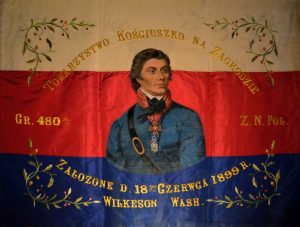 Passing the Torch: 100 Years of the Polish Home Association
Special thanks to Ryszard Kott

This 35-minute documentary is a portrait of the Polish community of Seattle centered around the Polish Home (the Polish Cultural Center) from its beginning at the end of the 19th century till 2018. It shows how different waves of Polish immigrants shaped the community and how the community itself evolved from an immigrant fraternity organization into a outgoing civic community sprouting many orgs and initiatives and presenting Polish culture and traditions to the public at the events such as the Seattle Polish Film Festival (at its 30th anniversary this year!) or the Polish Festival (at its 10 year anniversary).

The movie has been directed by Michal Pietrzyk and Ryszard Kott and produced by Ryszard Kott. It premiered at the Seattle Polish Film Festival in 2018. A DVD of the movie, as well as the anniversary book “100 Years of the Polish Home Association” is available at the PHA booth at the festival.